This is part of my project aiming to

The Hashtable Packing Problem is an optimization problem encountered when tuning Magic Bitboards in chess. Anyone trying to tackle it will have suspected that it is a hard problem, but (to my knowledge) so far no one has bothered proving that.

But indeed: The abstract Hashtable Packing Problem is strongly \(\mathcal{NP}\)-complete. We can therefore stop looking for optimal solutions and instead use heuristics (and still sleep well).

A hashtable packing is valid if none of the occupied buckets overlap, when building a combined hashtable by placing the hashtables at the given offsets in memory. That would be a hash collision for the combined table! 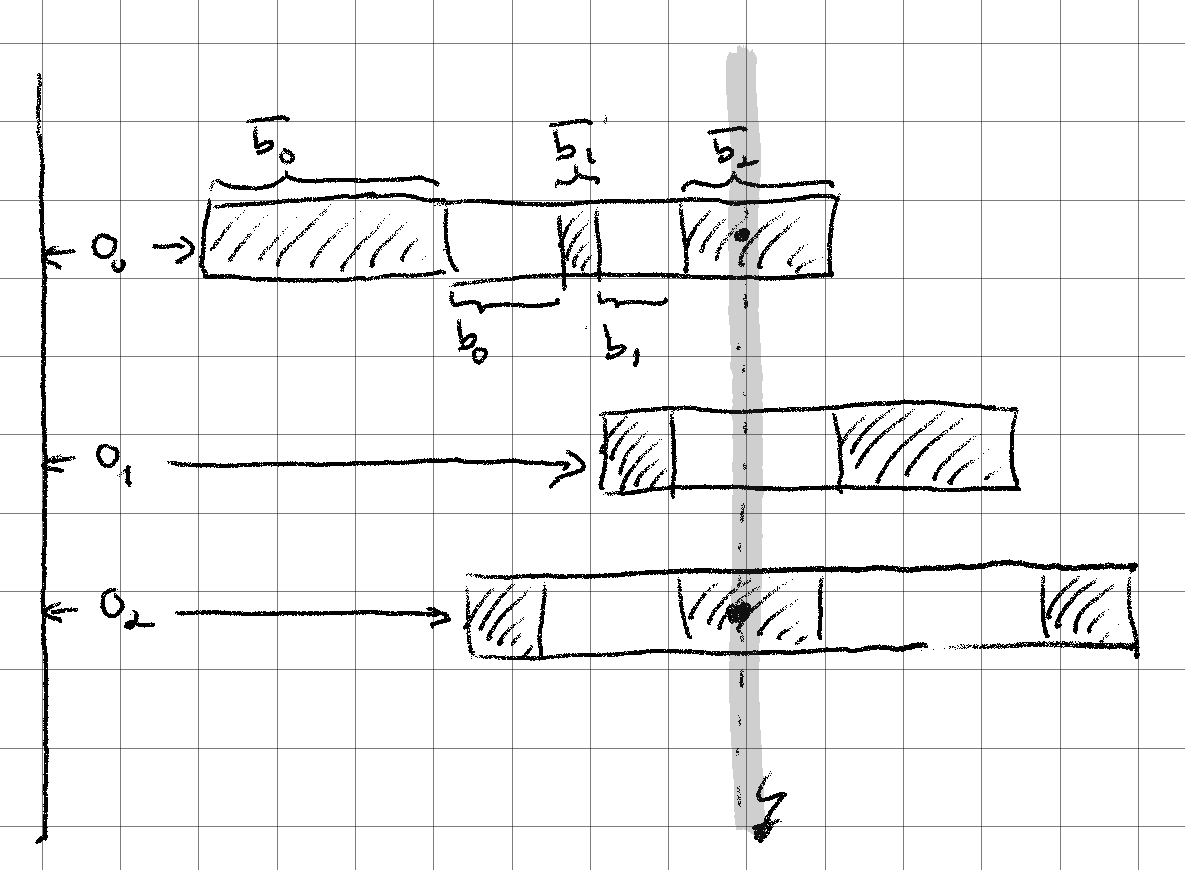 The decision question is: Does there exist a valid hashtable packing for the given hashtables with size not larger than \(K\)?

The decision question is: Can the multi-set be partitioned such that each partition sums to exactly \(L\)?

Observe that the restrictions on the \(a_i\) ensure that each partition would have to contain 3 elements, which is why this problem is called 3-Partition. The 3-Partition Problem is known to be strongly \(\mathcal{NP}\)-complete (Garey, Michael R. and David S. Johnson (1979), Computers and Intractability).

Lemma: Hashtable Packing is in \(\mathcal{NP}\).

Proof: We can easily verify in polynomial time that a given hashtable packing is valid and achieves the desired size.

Proof: Let \(L, a_0, \ldots, a_n\) be an instance of 3-Partition. We construct a corresponding instance of Hashtable Packing in polynomial time.

For each \(a_i\), create one hashtable that simply consists of \(a_i\) occupied buckets.

The stencil hashtables are built so that they cannot overlap with each other. Therefore each stencil contributes \(3L + 2\) to the size of any valid packing. This means the packing size \(K\) can be achieved if and only if all remaining hashtables fit in the empty buckets of the stencils, which each have size \(L\). This is equivalent to the question asked in 3-Partition.

Proof: We have already proven \(\mathcal{NP}\)-completeness.

Consider instances of 3-Partition where the largest number (\(L\)) is restricted by a polynomial in the size of a reasonable (e.g., binary) encoding of the instance. Since 3-Partition is strongly NP-complete, the restricted version remains NP-complete.

Apply the same reduction to create a corresponding instance of Hashtable Packing. Observe that the largest number (\(K\)) is also restricted by a polynomial in the size of a reasonable (e.g., binary) encoding of the instance.

This cannot be solved sequentially, for example the outcome of (3) might inform the selection made in (2). Regardless, to decompose this problem, suppose an oracle already revealed the solutions for steps (1) and (2) that will lead to an optimal solution. Even then, the remaining problem is an instance of the hard Hashtable Packing Problem. For Hashtable Packing we now know that (due to \(\mathcal{NP}\)-completeness, unless \(\mathcal{P} = \mathcal{NP}\)):

The instances we are interested in are quite large: Hashtables for 64 rook squares + 64 bishop squares, each with between \(2^4\) and \(2^{12}\) buckets. So asymptotics are likely to be important!

On the other hand, asymptotic results say nothing about individual instances. There may even be a restricted set of instances that contains all instances we care about (including Magic Bitboards in chess), but still can be solved efficiently.

Then again, the instances we created in the reduction are already quite restricted: Hashtables have similar size, and a very limited number of gaps. The only sources of additional useful restrictions can be the interaction of (a) the rules of the game with (b) the particular family of employed hash functions.

We can conclude that an optimal solution cannot efficiently be obtained by decomposing the problem and abstractly working with the resulting hashtables. We would have to exploit deeper connections (if they even exist) between the rules of the game and mask-multiply-shift hash functions.

Such insights seem out of reach. At least we now have a good justification to stop looking for optimality and to employ heuristics (like Volker Annuss already did successfully).